CAN THE SCALE OF OBSERVATION HIDE COMPLEXITIES IN THE DEFORMATION HISTORY OF A TERRANE? AN EXAMPLE FROM THE BALMUCCIA PERIDOTITE MASSIF, IVREA ZONE (NW ITALY)

scale of observation. Here we report a case from the Balmuccia peridotite massif, where microstructural observations on the websteritic dykes reveal that they recorded a two-stage deformation history. Lattice Preferred Orientations (LPO) measured in the peridotitic host rock indicate that the oldest deformation was characterized by sinistral simple shear while the youngest by pure shear flow regimes. However, the distribution of folded, stretched and folded-then-stretched dykes at the outcrop scale follows a pattern concordant with large strain accommodated by pure shear only. On the other hand, the only indication of a more complex evolution is provided by the uneven dyke distribution, which is inferred to be inherited from an older deformation event. In order to define the orientation of the dykes prior to the last deformation event, a backward restoration is presented. Integrating micro- and meso-structural observations, the relative orientation of the flow plane for the first deformation event and the strain ellipse for the second has been assessed. This approach resulted in the determination of a two-stage evolution for the Balmuccia peridotite. This local evolution allows discussing wider speculations on the late Paleozoic tectonics. The Balmuccia massif, while being deformed in a flow regime characterized by sinistral simple shear, presumably during a late-Variscan lithospheric-scale extensional event, was intruded by synkinematic Al-augite websterites. As extension continued, in the Early Permian, the massif was deformed by nearly pure shear flow and large horizontal stretching could bring the Balmuccia massif to lower crustal depths. 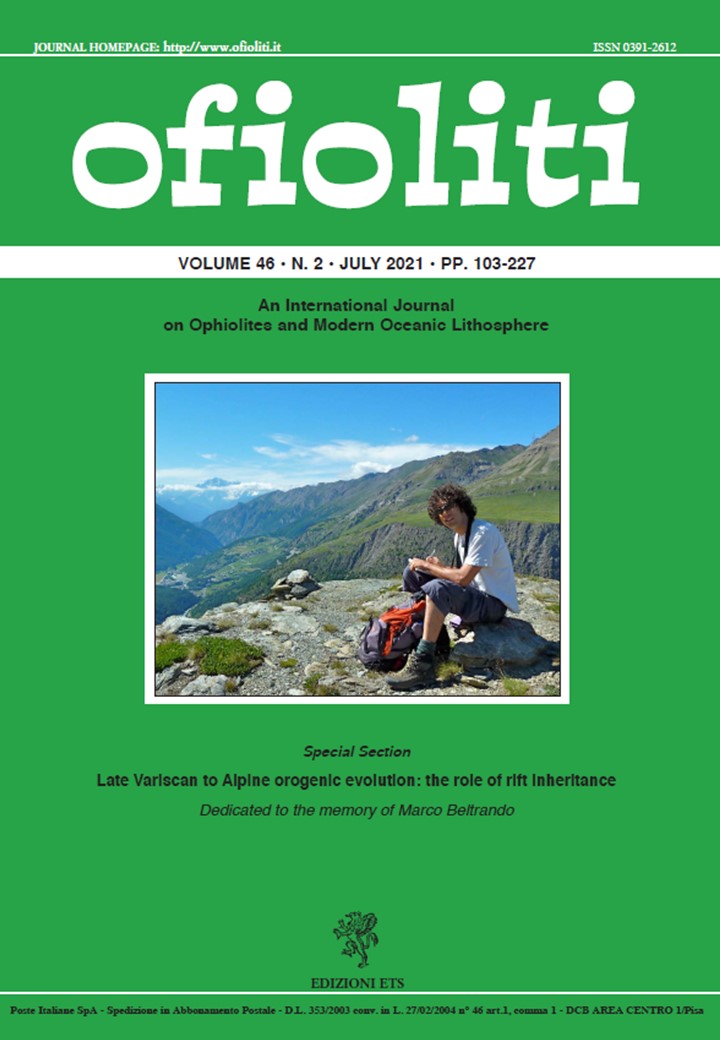 Beltrando, M. (2021). CAN THE SCALE OF OBSERVATION HIDE COMPLEXITIES IN THE DEFORMATION HISTORY OF A TERRANE? AN EXAMPLE FROM THE BALMUCCIA PERIDOTITE MASSIF, IVREA ZONE (NW ITALY). Ofioliti, 46(2). https://doi.org/10.4454/ofioliti.v46i2.541
Download Citation

Vol. 46 No. 2 (2021): Special section "Late Variscan to Alpine orogenic evolution: the role of rift inheritance" dedicated to the memory of Marco Beltrando"